The Triple Spiral Symbol of the Triple Goddess

This spiral is a replica of the one found in the main chamber of the megalithic tomb-sanctuary at Newgrange, Ireland. It is dated around 3000 BC, and part of the Stone Age Irish â€œgrave-passageâ€ culture. A similar triple spiral also appears on the Newgrange entrance stone. 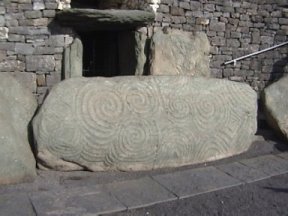 The triple role of the ancient goddess was to preside over birth, life and death. As triune as nature’s birth/death/rebirth cycle, she was maiden, bride and crone. when Christianized the ancient Celtic goddess became the new Brigid, the “saint” of hearth and home in whose name the fires were re-lighted each year on her February 1st saint’s day.

My son Robert who this year moved to Scotland wrote a very interesting blog about St Brigid who in Scotland is known as St Bride. I realized I had almost missed an opportunity to write about the spiral symbol of this Celtic goddess turned Christian saint, and to add some of my present thoughts about her influences and the present Celtic renaissance in its many emerging forms.

When Bob and I went to England in 1988 we headed for Glastonbury where he had visited a couple years before. He had said that when he got to the Tor for him this had felt like “coming home.” In other words, it was there that he had experienced a deep soul recognition and connection. At the time he had been surprised, as he had just come from the Borders region in Scotland and an Elliott clan gathering there. There was where he would have expected to have felt some connection with the land. But strangely he hadn’t.

While in the Glastonbury area we visited a number of the megalithic remnants of the ancient goddess cultures. Now I am wondering, were the Celts captive to the presence of the past in the land they now occupied? And was their influence something quickened, awakened, and that we brought back to Murray Creek with us?

There seemed to be reminders everywhere we were drawn to of the ancient ones’ beliefs that death is a passage to another world. That was not something either of us would have been personally conscious of at the time, but now eighteen years later and with Bob this past year having made this passage it is of the utmost relevance to me, and how and to what purpose I am called to live out the rest of my life. Moreover, with my ongoing experiences of him as still very much a continuing presence in this life as well, I find myself re-examining and reconsidering what I now believe about the nature of reality.

Through the megalithic monuments to the mother-goddess of old, she continued to teach that all of existence is cyclic in nature, and that there is a direct continuity between the material world and the other-world. The pre-Christian tradition of the Druids also recognized the unseen world as interpenetrating and effecting the visible world. And considering the credibility quantum physics is lending to similar ideas, is it any wonder that Celtic spirituality is experiencing a renaissance?

All through the lands of Bob’s and my ancestors–“the Isles to the North”– the stones bearing the message of the connection between this world and the after life are massive. The symbolic language of the carvings on these reminders is laboriously intricate. The underground burial sites are comparable in calculated human labor to the great pyramids, and thought to be as much as five hundred years older.

The standing stones and the underground passages we visited spoke to us, as did the Glastonbury Tor as a three dimension labyrinth, so much so that on returning home we created a labyrinth at Murray Creek after the pattern of the one that ascends to the top of the Tor. 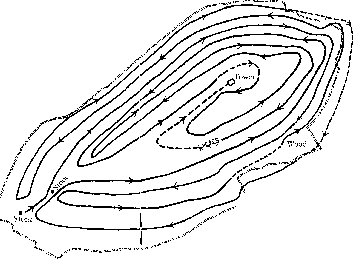 As a sequence of events, it was in connection with last year’s November cross-quarter days (All Hallows Eve, All Saints and All Souls Days) that it came to my attention the early inhabitants of the Tor region had held annually on these cross-quarter days a ritual honoring those among them who had died during the previous year and that these peoples had accompanied the souls of their loved ones to the top of the Tor which they held to be a passage or “portal” into the after life.

There is so much more to life than we in this life are able to consciously comprehend. Could the transformation I have been experiencing since Bob’s transition be this realization?

When Bob and Ann Elliott purchased their sixty acre Murray Creek property in 1974 their purpose was to establish a retreat center for Inner Healing. This was the beginning of Creative Living Center and later the home of CLC Press which gradually evolved into an on-line means of sharing what they were learning and experiencing about the processes of becoming whole. Ann was born in 1929 in Holden, Missouri. Her parents were both journalists and co-published the local newspaper. They had met in Mexico City where her father was on assignment for a Washington DC newspaper and where her mother was doing advanced studies at the University of Mexico. When Ann was six they separated and she moved to Kansas City where her mother began a long career in radio and television. In high school Ann was sent east to Penn Hall in Chambersburg, Pennsylvania. And that is where she met Bob who was attending Mercersburg Academy, the nearby boy's prep school. Bob was born in 1927 in Washington, DC. His mother had been a librarian in Hammond, Indiana before coming to Washington during World War I where she met his father, a young Marine who became an attorney when the war was over. Bob attended Sidwell Friends School in Washington through eighth grade and went on to Mercersburg, and from there, near the end of World War II, into the army. The war over, he began pre-law at Northwestern where Ann was studying journalism and doing secretarial work for her mother who was then Woman's Editor of American Broadcasting Co in Chicago. In the fall of 1947 Ann and Bob were married and the following spring left for Stanford University where Bob finished his undergraduate and went on to earn his law degree in 1952, by which time they were expecting the second of what would be their six children. During Bob's years at Stanford Ann studied and worked in the field of design. This led to her interest in symbolism, and the study of symbolism awakened her interest in spirituality, a combination that led to an interest in Jungian psychology at about the time Jung's writings were beginning to appear in English. It was through the writings of Christian Jungians such as John Sanford and Morton Kelsey that Ann became interested in the psycho-spiritual approaches to inner healing. Eventually she would connect with the three grand women founders of the San Francisco based Guild For Psychological Studies, all of whom had studied with Jung in Zurich. Together the three--Elizabeth Boynton Howes, Sheila Moon, and Luella Seibald--had established the Four Springs retreat center in Northern California where they conducted seminars based on "The Records of the Life of Jesus of Nazareth" according to a modified Socratic method. Ann participated in the Records and other related seminars at Four Springs during the 1980s. In the meantime, Bob was equally involved in pursuing his special interest in music as a means of furthering and deepening meditation. He was also studying shamanism with Michael Harner and the Institute for Shamanic Studies, and with Ira Progoff through his Intensive Journal Workshops. All this time, of course, he was carrying on a busy law practice in Lodi, California, some forty miles commute from Murray Creek. From 1984 until his retirement in 1998 Ann served as Bob's legal secretary. Ann, with both of her parents writers, had been writing off and on for a number of years, with numerous writings on symbolism published in magazines and journals, as well as two books on the use of symbolism in Christian education. In 1996-7 Parts I and II of Return to the Whole were published on the C G Jung Web Page, and this was the beginning of web publishing for Ann as a means of sharing the synthesis of ways to inner healing and wholeness she and Bob had experienced and been sharing throughout their years at Murray Creek. With their retirement in 1998 Ann began writing and editing full time, with her in progress "opus" being the series titled Return to the Whole, and including the full length book titled Higher Ground, offered here in its entirety. In 1992 Ann learned she was eligible to "test her vocation" as an Anglican Franciscans and after an inquiry and formation of some five years was, in 1997, professed. These are the TSSF initials that follow her name--The Society of Saint Francis--and for which order she now serves as a formation counselor. Additionally she is a Benedictine trained spiritual director and serves in this capacity also to whomever is willing to make the narrow, winding trip out Murray Creek Road.
View all posts by ann →
This entry was posted in Spirals. Bookmark the permalink.